You are here: Home / Health / Turmeric Curcumin Plus Comprehensive Review

Turmeric is one of those superfoods that has taken the natural health world by storm. While most people might use this spice to add flavor to curries, health enthusiasts use turmeric for its many purported health benefits. Just a few of the studied benefits include supporting a healthy immune system, supporting muscle and joint health and supporting healthy cognitive function.

This made me start to think about how I can start to experience some of the benefits of turmeric. Because of turmeric’s hype, you can get your fix of turmeric in many forms. I’m a huge fan of turmeric’s studied benefits – not its smell or taste. Lathering myself in turmeric soap or having a turmeric-ginger tea wasn’t exactly my cup of tea per se, however that’s not too much of an issue when I learned that supplemented turmeric may actually be more effective than raw turmeric. Hear me out. 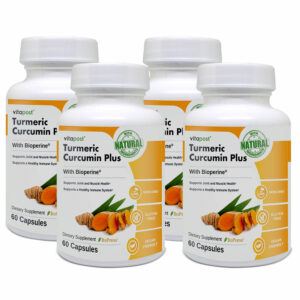 There are circumstances in which it is better to absorb nutrients through supplements over whole food sources. While rare, extracted turmeric is one of these unique circumstances.

The concentration of curcuminoids can be stronger in supplements compared to raw turmeric. While curcumin typically makes up 2 – 8 % of turmeric, the curcumin extract in turmeric supplements typically include 95% curcuminoids. Because of the low source of curcumins in turmeric, you will struggle to test the health benefits of turmeric by simply sprinkling it on your food.

Furthermore, one study showed that cooking turmeric may result in the loss of the curcumin compound. Boiling turmeric for 20 minutes was found to be the most damaging, meaning that your turmeric curry or slow cook becomes less and less beneficial.

Many turmeric supplements also include some form of peppercorn. The reason for this is curcumin is tricky to absorb on its own. However, when paired with peppercorn, there can be a 20-fold increase in bioavailability compared to turmeric used alone. Some patented forms of pepper extract have been specifically developed for this purpose.

When choosing between turmeric capsules, a concerning number of supplements were made overseas or were Genetically Modified Organisms – GMO. I don’t know about you, but I’m willing to pay extra for a supplement that is manufactured in the US and is non-GMO.

Another thing I would look for is the presence of organic or non-organic turmeric. I understand the process of labeling an ingredient as organic is pretty stringent. For an ingredient to be labeled as organic, it needs to be produced without genetic engineering or GMOs. Organic turmeric root is quite a bit pricier, which is why it is fairly rare to find an affordable supplement with organic turmeric.

Surprisingly, some turmeric supplements weren’t vegan – I find this pretty shocking considering the key ingredients are plant based! This is largely due to the capsules being made from gelatin. While I’m not vegan, I can see the benefit of keeping supplements as plant-based as possible and avoiding unnecessary harm caused by gelatin capsules.

There were also some promising soft gel options, however none of these contained organic turmeric and many had a long list of fillers. Soft gels are sometimes vegan, but often contain gelatin. If possible, I would opt for turmeric supplements in a vegan-friendly vegetable capsule.

Considering all of this, I discovered VitaPost Turmeric Curcumin Plus. Vegan friendly, 1500mg of organic turmeric, and a strong concentration of curcumin, make this my turmeric supplement of choice.

VitaPost Turmeric Curcumin Plus is a dietary supplement consisting of BioPerine and turmeric extracts. A huge perk is the formula was designed to be enjoyed by many people. It is vegan friendly, gluten free, sugar free and non-GMO.

Benefits of VitaPost Turmeric Curcumin Plus 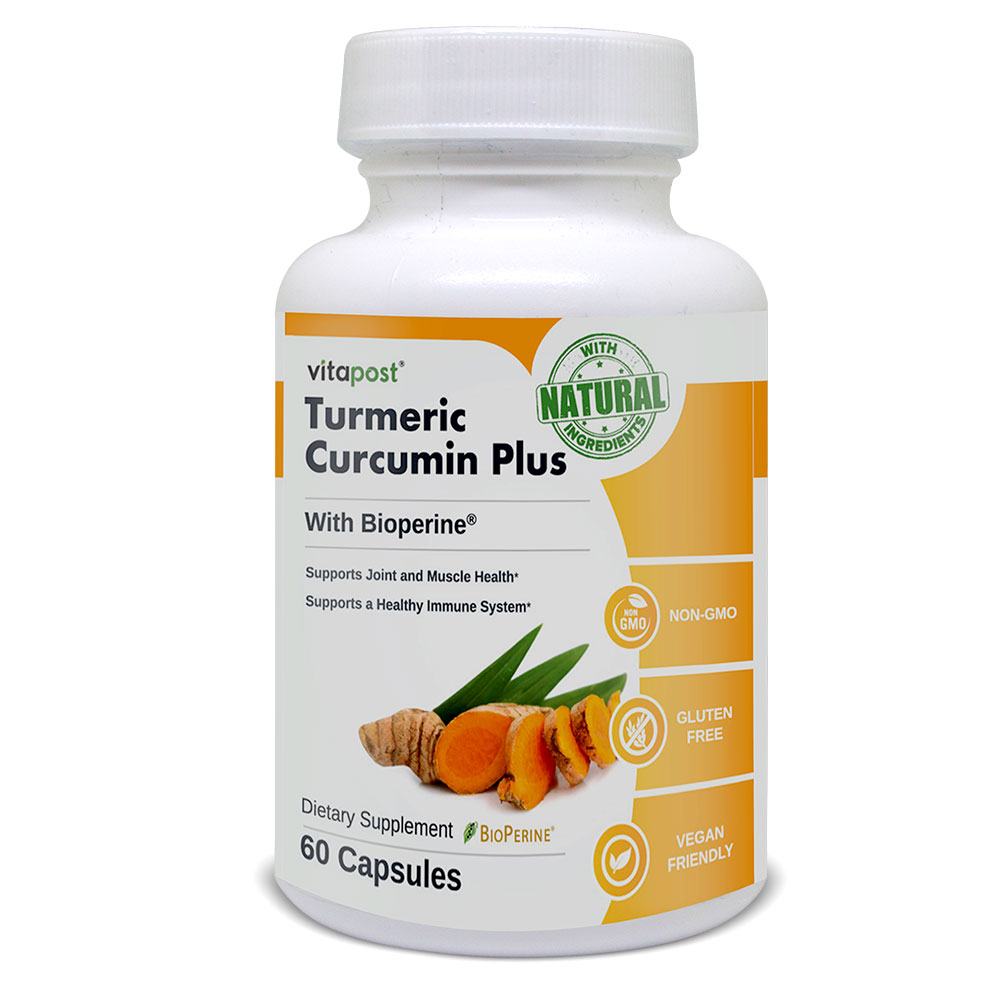 You may be wondering who should consider turmeric supplements. The great thing about Turmeric Curcumin Plus is that just about anyone could benefit from supplementing turmeric. Everyone can benefit from antioxidant support in some form and turmeric is widely tolerated. That being said, always consult a healthcare professional before taking any dietary supplement – that includes this one.

I’d be especially wary if you are pregnant. Large amounts of curcumin taken during pregnancy may alter the levels of estrogen in the body. The implications for this on pregnancy aren’t worth it in my opinion, however I am not a doctor and would recommend consulting yours before making any decisions.

The Science of Life + The Spice of Life

Ayurveda is one of the world’s oldest holistic healing systems. In Sanskrit, Ayurveda means “The Science of Life.” Originating from India, it follows the principle of promoting good health rather than fighting disease.

Turmeric has been used for centuries in Ayurveda practices to promote good health. It is thought to have many beneficial properties and is frequently prescribed as a remedy in a paste form. Perhaps the wide range of assumed benefits can be linked to modern science’s findings that this root has strong antioxidant properties.

The formula for VitaPost Turmeric Curcumin uses some of the practices from Ayurveda that have been scientifically proven to combine the science of life with the spice of life.

How Does Turmeric Curcumin Plus Work? 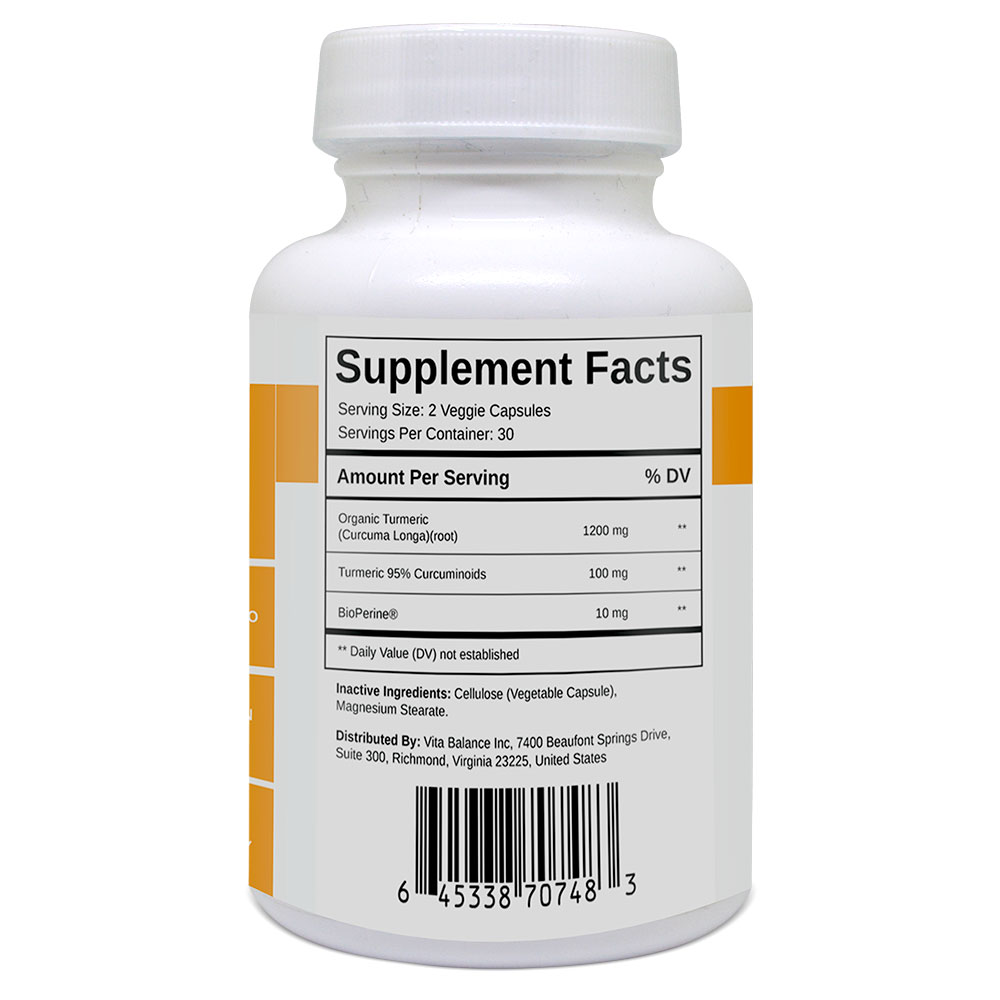 It wouldn’t be right to talk about a turmeric supplement without mentioning the turmeric first. This golden superfood has been used in Ayurveda wellness practices for thousands of years. Modern medicine is only just catching up to the Ayurveda practices, with many studies showing promising health benefits.

The main clinical targets of turmeric are the digestive organs. Some studies have shown promising results when turmeric is used for the intestines, bowel, and colon.

Turmeric is well-known for providing potent antioxidant support. While many of turmeric’s benefits can be linked to its curcuminoids, the verdict is still out on whether turmeric or curcumin is better for your health. More research is needed before scientists can conclude whether one is better than the other. That said, I would try to take the closest form to the food (turmeric) as possible. I can see why the Turmeric Curcumin Plus formula includes 1200mg of organic turmeric and 100mg of turmeric with 95% curcuminoids.

On that note, let’s look into what is so special about curcumin.

A lot of the research into turmeric quickly deflects to curcuminoids and their benefits. Studies indicate that curcuminoids also support the immune system, cognitive function, and joint health.

Curcuminoids are considered to be natural antioxidants. It is this strong antioxidant effect that can support joint and muscle health by fighting free-radicals and oxidation.

Just like ginger, curcumin also makes a special appearance around Christmas time. While we wouldn’t suggest swapping your gingerbread men with turmeric cookies just yet, I can absolutely see the benefit of supplementing turmeric to support the immune system and your body’s antioxidant potential. This immune system support also further bolsters curcumin’s joint and muscle support. ¹¹

Perhaps curcumin’s greatest flaw is how tricky it is to absorb on its own. It doesn’t matter how many tablespoons of curcumin you eat if hardly any of the nutrients are being absorbed.

Remember when I mentioned that turmeric is best fortified with pepper? Well, meet the pepper! BioPerine (known chemically as piperine) is the most well-known black pepper extract. This patented extract’s history tells the tale of its success, with over 20 years of being used as a bioavailability enhancer.

When BioPerine is taken with curcumin, there can be a 20-fold increase in bioavailability compared with curcumin alone. Who would’ve guessed that a black pepper extract could be so powerful?

To understand the power of combining these ingredients, it helps to know a little bit about how the body absorbs nutrients. After all, it’s not about what you eat, but what you absorb.

When you eat real food, you’re not just consuming single nutrients, but rather a whole range of compounds (minerals, vitamins, enzymes and other goodies). These compounds work together to allow the body to harness the best results. When one compound is isolated – like curcumin from turmeric – it is unlikely to be used by the body in the same way. Scientific consensus currently stands that you benefit from all the parts of the root, just the way nature intended.

There are many beneficial compounds within the turmeric root aside from the curcuminoids. This includes the volatile oils, sesquiterpenes, aromatic components, and rhizomes. The volatile oils have shown potential in supporting turmeric’s immune support effects. ¹³ Furthermore, the BioPerine of Turmeric Curcumin Plus unlocks the turmeric’s benefits in a way that the raw root alone cannot do.

Turmeric Curcumin Plus includes 60 gorgeous orange capsules in every bottle, equivalent to a one-month supply. Take two per day 20-30 minutes before a meal. I’d say the size of the capsules are easy to swallow for most people.

A few moments after opening the bottle you will be greeted with a warm turmeric aroma. As turmeric has a strong aroma, I’d be concerned by any turmeric supplements that don’t have a turmeric smell (except for maybe soft gels).

Keep in mind that I am not a registered dietician or doctor. I am just your average person with the time to investigate. Always talk to your healthcare professional before using any dietary supplement.

Let’s get to the root of it

Altogether, Turmeric Curcumin Plus seems like a great option for anyone considering a turmeric supplement. It’s not the cheapest supplement on the market, but in exchange for being non-GMO, made in the US, and containing organic turmeric, I would say it is well worth it.

Click Here to Learn More About Turmeric Curcumin Plus