You are here: Home / Health / Krill Oil Plus Review

The article was written by a guest writer.

What’s the Deal with Krill Oil?

My grandparents took cod liver oil, as a liquid, from a bottle. Gross, but understandable.

Traumatized by cod liver oil, my parents chose instead to take fish oil in capsules. Far better than raw, liquid oil – but still not at all appetizing.

And me? Well, after all my research, I’m giving krill oil a go. It’s supposedly the new generation of fish oil, with a bunch of unique advantages.

People have taken some form of fish oil for ages. Seafood is considered to be especially beneficial when included in the diet, and the reason for that is the presence of two special omega-3 fatty oils:

EPA and DHA. While some other non-seafoods contain omega-3’s, it’s not remotely close to the amount contained in various fish – and most importantly, it’s a very different kind of omega-3.

Thankfully I found VitaPost Krill Oil Plus. There’s nothing fishy about these little red soft gels – all I taste is a hint of vanilla flavoring. They’re Friend of the Sea Certified, and best of all, the price is right.

Why Do People Take Fish Oil? 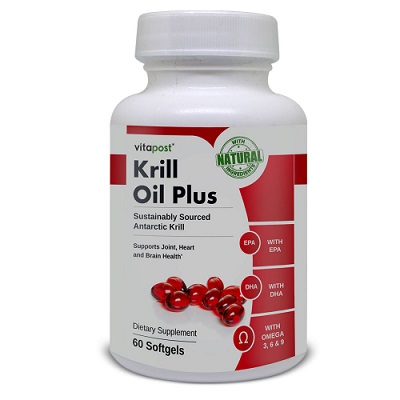 Omega-3s in general became popular in the 1930s after they were discovered as essential dietary fats. They’re called ‘omegas-3’ because of a chemistry reason – the first double bond from the omega end of the carbon chain is after the third carbon … anyway, that’s not important. What is important is that our bodies can’t create omega-3s from other types of oil, so we need to get them in our diet. It’s the same with omega-6s, but in modern diets we actually get too much omega-6s.

People in the ‘30s didn’t realize the different kinds of omega-3s had different effects and uses in the body. It wasn’t until the late 70’s that an association was made between a whole bunch of healthy people and two omega-3s you can only get from seafood: EPA and DHA.

Nowadays nutritionists and insurance companies alike know how essential it is to get DHA and EPA.

And if you’re not eating enough fish (or other seafood like shrimp), then fish oil is the next best thing. Or is it?

It’s been half a lifetime since 1980. If krill oil was around when EPA and DHA became ‘a thing,’ it would have been much more popular.

The Advantages of Krill Oil 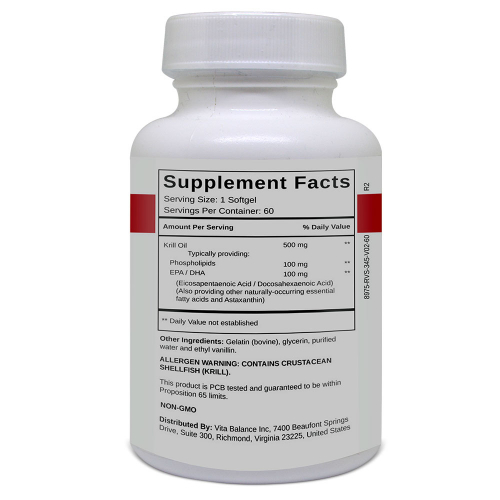 Since the main benefit of fish oil is the omega-3’s, it makes sense to choose a strong omega-3 supplement, right?

For a dietary supplement to be strong, your body has to make use of all of it. The thing about fats and oils is they can be hard to digest. Too much oil and it’ll just pass right through you. The omega3s in krill oil is considered to be more easily absorbed than those found in fish oil. This is because half of krill oil’s EPA and DHA is attached to ‘phospholipids,’ which are easier to digest than the plain ‘triglycerides’ in fish oil. Another perk that krill oil has, is that it’s considered to be very stable and free from heavy metals.

I think many people who don’t get many omega-3’s in their diet could benefit from krill oil supplements. Omega-3’s are believed to support heart health, skin health, joint health, and brain health, things which are relevant to many people. I have dived into some of the research below to see what is believable and what needs further investigation.

The studies have shown a mix of results, some good, some bad. I found a study that compares older and more recent studies to find the reasons for the different results of omega-3 fatty acids. The meta-analysis found overall evidence still supports the American Heart Association’s recommendation of having 2 servings of fatty fish per week.

Some people are blessed with a naturally gorgeous glow. For the rest of us, we turn to skin care, serums and supplements to help achieve the same effect. One nutrient you may want to consider is astaxanthin. This antioxidant has growing evidence that it can be taken for skin appearance, particularly aging skin.

Astaxanthin is believed to help support the appearance of aging skin by affecting the expression of collagenases (the enzymes that break the peptide bonds in collagen). Krill oil is a natural source of astaxanthin, and it is the ingredient responsible for krill oil’s bright red ‘pop’.

Although fish oil has far-reaching benefits, supporting joint health is the reason so many people start reaching for this supplement. People who supplement with omega-3 daily have  found this greatly supports their joints.5 In the case of krill oil, the intense antioxidant astaxanthin has also been associated with the support of connective tissue and healthy joints.

The scientific community has confirmed many great benefits of omega-3 fatty acids, and I am sure there are many other benefits yet to be confirmed.

Why Choose Krill Oil Plus? 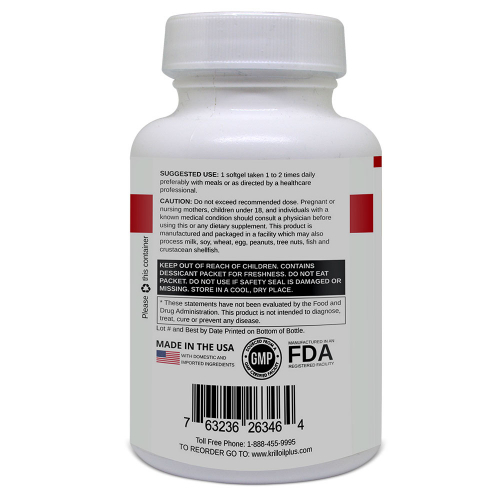 The planet is a limited resource and it is something we all have a responsibility to consider, not just for our own sake but for our children and grandchildren. Sustainability is especially important for the ocean as our survival depends on the oceans.

I learned the hard way is not all fish oil supplements are made the same. Some are about an inch long and are awful to swallow!

Thankfully, Krill Oil Plus is a teeny half-inch oval. Now when I picture omega-3 supplements, I picture these bright red softgels, about the size of a fingernail.

One of the most off-putting things about fish oil in any form is the thought of the fishy smell or taste.

This is especially true for anyone who grew up slurping a teaspoon of cod liver oil or taking an oldschool fish oil tablet with the nasty aftertaste.

Thankfully times have changed and today’s krill oil softgels are very advanced. Some softgels use a specially-formulated capsule to delay the release of fish oil; some use a flavored capsule. The Krill Oil Plus softgels have a subtle vanilla flavor. This smells like freshly baked cookies – and I haven’t experienced any fishy aftertaste. 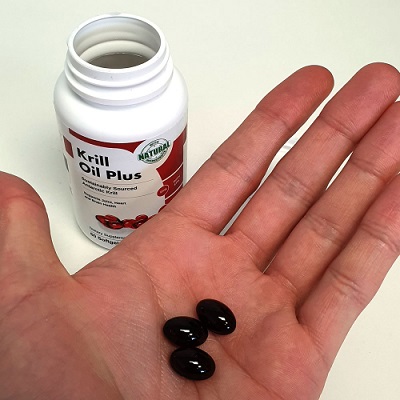 You should take one softgel of VitaPost Krill Oil Plus once or twice per day or as directed by your healthcare professional. Depending on how many capsules you take per day, one bottle can last one to two months. At two softgels a day, you’ll be getting 200 mg of very-long-chain omega-3s (EPA & DHA) as well as 200 mg of phospholipids. That goes a long way towards your weekly omega-3 intake!

It is recommended you take Krill Oil Plus with meals. This is because eating oils on an empty stomach doesn’t adequately stimulate the production of the bile that is used to break down oils – leading to inefficient absorption. I.e. it would be a waste.

This product contains crustacean shellfish through the krill. As well as the presence of fish, the softgel capsule is made from gelatin (bovine) so it is not a vegetarian or a pescatarian product.

As with any supplement, always talk to your healthcare professional before using any dietary supplement.

Of all the krill oil supplements on the market, I am most happy to recommend VitaPost Krill Oil Plus.

It has a reliable sustainability certification, it contains a solid amount of beneficial phospholipids and EPA/DHA, and the capsules don’t have any fishy taste or smell.

Krill oil is definitely worth considering for an everyday all-around support supplement. Whether you are looking for skin support, heart support, cognitive support, joint support or something else,

VitaPost Krill Oil Plus has something for everyone.

Click Here to Learn More About Krill Oil Plus

Click here to read about the importance of healthy immune system